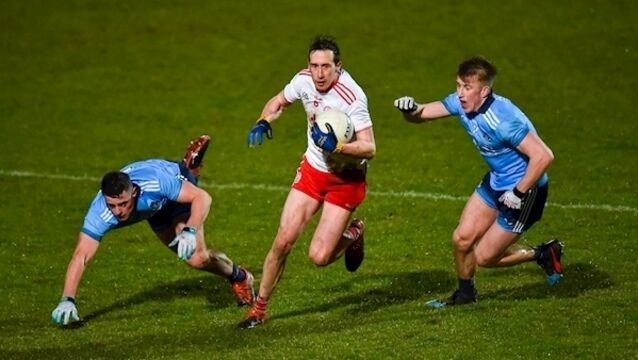 An outrageous night for a game of football finished with a cracking Rory Brennan goal as Tyrone wiped out Dublin's unbeaten start under Dessie Farrell. 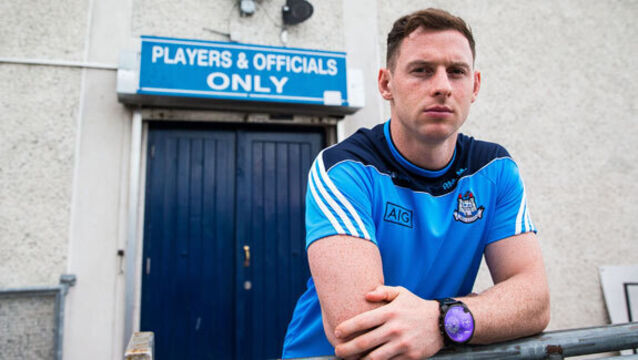 Dessie Farrell has resisted the temptation for major change ahead of Saturday night's Allianz Football League trip to Tyrone, naming a team with two changes. 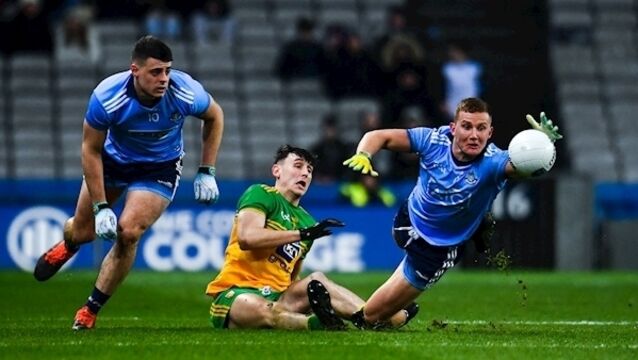 They’ll naturally be remembered for great summer days but when Jim Gavin was in charge of Dublin, they prided also themselves on not losing Allianz League games.

Well, did we ever suspect otherwise?

Opportunity lost for Rossies as Dublin deliver yet again

Dublin’s second-half revival secured a deserved five-point win at a damp Dr Hyde Park, a result which was harsh on their hardworking hosts.

Goals from Con O’Callaghan and Dean Rock enabled Dublin to maintain their push for a berth in this year’s league final after overcoming a spirited Roscommon challenge in wet conditions at Dr. Hyde Park.

MONAGHAN 2-12 DUBLIN 0-17: In the end, we were given a dramatic conclusion rarely in keeping with the general tedium of events as Fintan Kelly fired over a glorious point deep into injury-time to secure a noteworthy success for Monaghan against the All-Ireland champions.

Galway get under Dublin's skin at first attempt

Gawlay 0-13 - Dublin 0-13:&nbsp;Every other top football team in the country have tested themselves against Dublin under Jim Gavin&rsquo;s management, but finally Galway had their crack &ndash; and at the first try they found a way under their skin.

It seems laughable to think of it now but this was a summer that started with suggestions that Dublin were slipping back towards the chasing pack thanks to their loss to Kerry in the league final.

Five late, unanswered points salvaged an unlikely draw for Dublin at HQ against Tyrone this evening and extended to 31 the number of games the reigning league and All-Ireland champions have gone unbeaten.

Adrian Spillane will make his league debut for Kerry as one of three changes to the side for tonight&rsquo;s Allianz FL Division 1 clash with Mayo in Austin Stack Park (7pm).

Dublin get back in their stride

Cavan 0-11 Dublin 0-18: An occasion to remember for Cavan, business as usual for Dublin.

Mayo goalkeeper David Clarke has picked up his first All-Star award, despite being dropped for the All-Ireland final replay.

Jim Gavin disappointed for fans caught out by fixture farce

Dublin 1-13 Roscommon 1-12:&nbsp;Jim Gavin expressed disappointment for the Dublin fans who had to alter their travel arrangements for their side&rsquo;s narrow win over Roscommon at Carrick-on-Shannon.

Dublin 1-10 Donegal 0-7:&nbsp;Donegal manager Rory Gallagher has insisted that the county has no interest in pursuing James McCarthy any further over a dangerous incident shortly before his dismissal.

Down 1-7 Dublin 1-15:&nbsp;Still holding a flawless record as they stride towards the Allianz League semi-finals may suggest Dublin are passing through the spring without being road tested. Jim Gavin, however, insists that the ride has been &ldquo;a little bit bumpy&rdquo;.

Win brings Dubs' semi-final hopes closer, but Down look certain for the drop

The Dubs made virtually certain of a National Football League semi-final place with a comfortable if unspectacular eight points win over Down at Pairc Esler.

Kerry manager Eamonn Fitzmaurice has called for a disciplined approach from his side in tomorrow&rsquo;s Allianz Football League Division 1 clash with Mayo in Elverys MacHale Park (2.30pm).

Kerry manager Eamonn Fitzmaurice has backed Paul Murphy to shine again at centre-forward, though he accepts that tomorrow&rsquo;s Allianz FL Division 1 clash with Donegal in Tralee will represent a different challenge for the Rathmore man than Down did last week.

Glory for Watergrasshill after hard-earned win

Dublin&rsquo;s Philly McMahon is in line to pick up the 2015 footballer-of-the-year award, having been named on the all-Dublin three-person shortlist.

Dublin’s comprehensive All-Ireland quarter-final win today put the seal on what was a painfully uncompetitive weekend at HQ.

The opposition and the defensive challenge was a novel one for Dublin but the end result was familiar as the All-Ireland favourites strode to a fifth consecutive Leinster football title success at Croke Park.

Watergrasshill climb back to shock Cloyne

Watergrasshill 1-16 Cloyne 2-11:&nbsp;&ldquo;We won with pure heart and determination,&rdquo; was the verdict of Watergrasshill manager John O&rsquo;Regan after his side battled back from eight points down to snatch victory at the death over a fancied Cloyne in the Cork Premier IHC on Saturday.

Dublin 1-15 Cork 2-7: After a week in which Dublin&rsquo;s home comforts of Croke Park were atop the pre-Championship agenda, Jim Gavin&rsquo;s men made a successful 600km round-trip to the hilly amphitheatre of Cill na Martra yesterday.

Mayo 0-10 Dublin 2-18: Just two weeks after they tanked Monaghan by 13 points in Castlebar, Mayo suffered the heaviest Division 1 defeat thus far when Dublin disposed of them in business-like fashion at the same venue.

McCaffrey runs the show as UCD book clash with DCU

Sigerson Cup Quarter-Final: UCD 1-19 GMIT 1-9: Jim Gavin wasn&rsquo;t at Belfield yesterday but if the Dublin manager gets a chance to view the tape of this game, he will be suitably intrigued.

UCD do damage in first half

Cork finish the stronger in satisfying victory against Dublin

Kildare 0-21 UCD 1-05: Jason Ryan has raised the issue of college teams competing in the inter-county pre-season tournaments again after his side trounced UCD at St Conleth&rsquo;s Park to set up a Bord na Móna O&rsquo;Byrne Cup semi-final against DIT on Sunday.

Dublin won a second All-Ireland U21 Football Championship title in three years with a devastating attacking performance at O’Connor Park in Tullamore.

Dubs progress to U21 Football final with late free

Cormac Costello pointed from a late free to snatch victory for Dublin in this dogged Cadbury’s All-Ireland U21FC semi-final at O’Moore Park.

UUJ wrap it up early

UCD’s footballers filed through the doors of the large entertainment tent adjacent to the main stand at half-time in this Sigerson Cup semi-final.

Dempsey double swings it for Árdscoil

Colman’s held by Clonmel in thriller