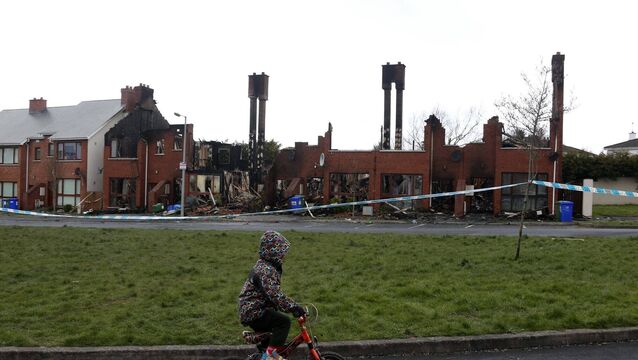 There has been major focus on remediation schemes for homes damaged by mica and pyrite recently, but those whose homes are considered dangerous through fire safety deficiencies are still waiting for any sort of resolution, writes Mick Clifford 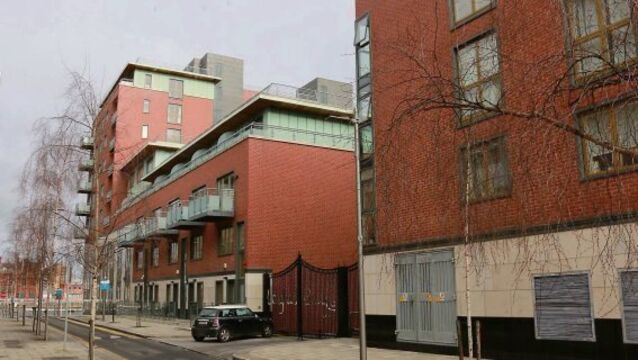 Apartment owners in Longboat Quay last night agreed to accept a proposal to have the fire safety deficiencies in their Dublin dockland development addressed in order to avoid having to evacuate their homes by May.

What price the deal on Longboat Quay?

An investigation into the structure of the Longboat Quay apartment complex in Dublin has revealed major problems with the roof.

Someone finally admits they got it wrong

Something strange happened this week. An individual stood up and said he&rsquo;d got things wrong; that he and his company were culpable for a big mistake; and that moves would be made immediately to rectify it.

Longboat Quay: One option but is it the best one for residents?

While Bernard McNamara&rsquo;s offer to do remedial work at the Longboat Quay complex at cost price would save residents financial pain, questions arise as to how the work could be done at this rate and if the recommended works would be completed in full, writes Michael Clifford

Developer in fresh offer to do Longboat Quay works

Bernard McNamara has made a fresh offer to apartment owners in Longboat Quay to do the remedial work which is currently being required under a fire safety order.

Residents at Longboat Quay apartments in Dublin have been given 18 months to complete vital fire safety modifications which will cost in the region of &euro;4m.

Residents at Longboat Quay apartments in Dublin have been given 18-months to complete almost €4m worth of vital fire safety modifications.

Residents of Longboat Quay, who face eviction from their homes on foot of a fire safety order, are to resume legal action against the Dublin Dockland Development Authority after the breakdown of talks yesterday.

Andrews calls on Government to act on Longboat Quay

Dublin City Councillor Chris Andrews is calling on the Government to act on Longboat Quay as a matter of urgency and end the uncertainty for almost 300 families.

RESIDENTS in Longboat Quay await to see whether they will have to fund remedial works on their homes, but they are not alone, writes Michael Clifford.

The management company representing residents in Longboat Quay has lodged an appeal to the fire safety order that was served on the apartment blocks 10 days ago.

Longboat Quay architect ‘would be happy to live there’

The architect who oversaw the construction of Longboat Quay has said he would be happy to live in the complex with his children.

Kenny ‘has no idea’ how many Longboat Quay situations exist

Taoiseach Enda Kenny has said he is &ldquo;convinced&rdquo; other Longboat Quay situations exist but admits he has no idea how many.

Immediate safety audits at five schools are to be carried out by the Department of Education following revelations earlier this week that a &ldquo;similarly built&rdquo; school developed by the same firm was discovered to be a serious fire safety hazard.

The company that built a 200-child primary school in 2008 &mdash; found, by accident, six years later to have serious fire safety concerns &mdash; has constructed at least 25 other schools for the State, including two since the issues emerged.

The first steps towards the serving of a fire safety notice have been taken by Meath County Council on a development which was labelled a firetrap over a year ago.

There are calls for a scheme similar to the one in place for pyrite remediation to be made available to homes issued with fire safety notices.

The law is an ass-covering scheme for dodgy developers

All the evidence suggests that when the Longboat Quay scandal first arose, the main focus was to keep things under wraps, reports Michael Clifford

Audit of all boom builds may fall on cost

Mooted Government plans for a national audit of all buildings and apartments constructed during the boom are likely to be rejected over concerns it will be too expensive and cause too much disruption for people living in or using the sites.

The builders behind a 200-child primary school, found six years after it opened to have serious fire safety problems which could have seen it collapse during a blaze within 20 minutes, is still tendering and winning Government contracts.

Owners and residents at Longboat Quay say they are considering legal action to cover the cost of emergency works at the apartment complex.

The Minister for the Environment Alan Kelly is to meet with owners and residents of the Longboat Quay complex in Dublin today.

Fire safety controversies have blighted apartment blocks and now a school,&nbsp;prompting Fiachra &Oacute; Cionnaith to ask where go from here

Pupils at firetrap school for 6 years

More than 200 primary students were attending a school for six years before it was discovered it was a serious fire hazard, the Irish Examiner has learned.

Longboat Quay residents should not be forced to pay for remedial works, votes Council

Dublin City Council has passed an emergency motion to support Longboat Quay residents' bid not to be forced to pay for remedial works at the complex.

Dublin City Council will this evening discuss an emergency motion to ensure Longboat Quay residents are not forced to pay for remedial works at the complex.

An internal Dublin Fire Brigade report recommended the serving of a fire notice on Longboat Quay in May of last year, the Irish Examiner has learned.

Michael Clifford looks at the contrast between the fire inspection report on the controversial apartment block in 2014 and those who&nbsp;signed off on the complex&rsquo;s safety features eight years earlier and asks who, or what, was responsible for the glaring differences.

The man responsible for the design of Longboat Quay has challenged claims that walls, smoke vents and fire doors are inadequate.

It was on one level somewhat appropriate that Environment Minister Alan Kelly was absent when the issue of the deplorable state of affairs surrounding the 900 residents who occupy 298 apartments in the Longboat Quay development was raised in the D&aacute;il.

Longboat Quay: Developer crawls back out of his hole

Poor old Bernard McNamara got a going-over during the week. McNamara is a developer and former Fianna F&aacute;il councillor. A hardened cynic might say that&rsquo;s enough to merit a perpetual going-over. But in fairness to the man, he was well got in places high and low before his own fall from grace into the clutches of bankruptcy.

Construction industry professionals are at odds as to whether new regulations, introduced after the Longboat Quay development had been built, would prevent similar safety problems emerging.

There have been calls for a full review and audit of apartments in the Dublin Docklands after the Longboat Quay complex was found to have fire safety issues.

Longboat Quay: ‘To say we’re horrified is an understatement’

Maria O&rsquo;Callaghan was waiting for the call yesterday.

Residents of Longboat Quay have rejected as &ldquo;wholly unacceptable&rdquo; an offer from the Dublin Docklands Development Authority (DDDA) to contribute towards the cost of remedial works in their building.

Martin McAleese resigns as chair from Priory Hall board

Martin McAleese, husband of the former President Mary McAleese, has resigned his position as independent chair of the Priory Hall Implementation Oversight Group.

The Dublin Docklands Development Authority has written to the management of the Longboat Quay apartments with an offer of financial support for the cost of the repair works needed.

Pressure is mounting on Dublin City Council to foot the &euro;4m bill for fire safety remedial works in the 299-apartment complex Longboat Quay.

The Taoiseach's being asked to urgently intervene to help 300 families who are facing evacuation from an apartment block which doesn't meet fire safety standards.

The Tánaiste Joan Burton has said Dublin City Council and the Fire Brigade are engaging with the 300 families who could be forced to evacuate from an apartment block tomorrow.

Fire-risk flat owners must pay €4m or block will close

Owners in a controversial apartment block were told last night they have to come up with &euro;4m in less than a week or Dublin Fire Brigade will move to have the building evacuated.

Documents furnished to a buyer of a unit at the questionable Longboat Quay complex did not reveal the extent of existing issues, writes Michael Clifford

An apartment in the controversial Longboat Quay development has been sold at auction to a bidder who was unaware of the extent of fire safety issues in the building.