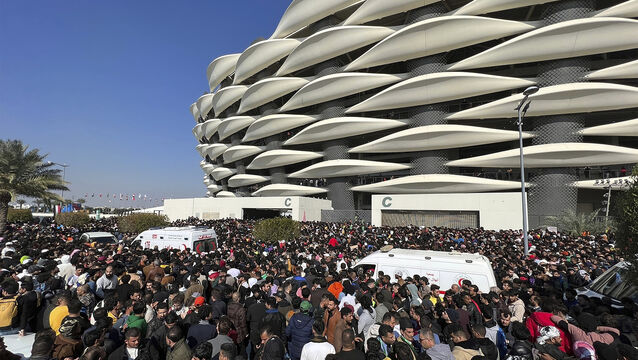 Two people have been killed and dozens hurt in a stampede outside a football stadium in southern Iraq, a health official said. 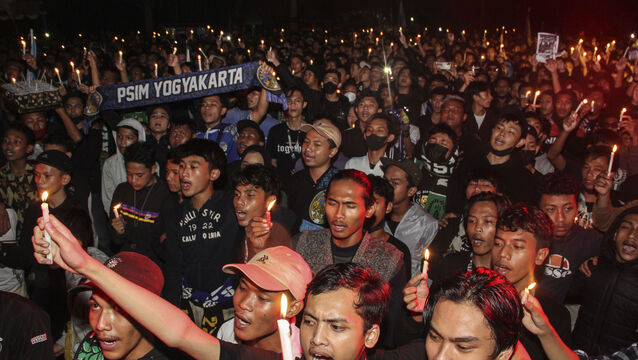 Indonesia’s president has said the country will not face sanctions from football’s world governing body after the firing of tear gas inside a half-locked stadium caused a crush at the exits, killing 131 people, including 17 children. 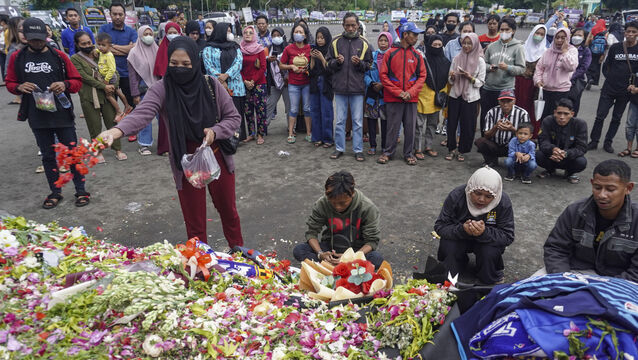 Indonesian police have announced they are bringing criminal charges against three officers and three civilians for their roles in the deaths of 131 people when police fired tear gas inside a football stadium, setting off a panicked run for the exits ...

Indonesian police said they are investigating more than a dozen officers responsible for firing tear gas at a football match, sparking a crush that killed 125 people.

Families and friends of some of the 125 people who died in a crush after an Indonesia football match are mourning the victims as their bodies were returned home.

A minute’s silence was observed before football matches around the world on Sunday in memory of the victims of the disaster at a stadium in Indonesia that claimed at least 125 lives.

What was behind the deadly Indonesian football match stampede?

Violence and a deadly stampede that erupted following a domestic league football match on Saturday night marked another tragedy in Indonesian football. Here is a look at how the chaos occurred and what is being done to prevent future incidents.

Clashes between supporters of two Indonesian football teams in East Java province killed at least 125 fans and two police officers, with police saying most of the victims were trampled to death.

Twenty people were injured in a stampede when thousands of people thronged counters selling tickets for an India-Australia Twenty20 cricket match in southern India, police said.

Former Israeli Prime Minister Benjamin Netanyahu has testified that he bears no responsibility for the safety gaps that led to a deadly stampede that killed 45 people last year.

A stampede on Saturday at a church charity event in southern Nigeria left 31 people dead, police said, a shocking development at an event that organisers said aimed to “offer hope” to the needy.

At least 29 people in Liberia, including 11 children and a pregnant woman, have died in a stampede of worshippers at a Christian ceremony in a densely populated area of the capital, Monrovia, officials said on Thursday.

12 killed in crowd surge at Hindu shrine in Kashmir

A crowd surge at a popular Hindu shrine in Indian-controlled Kashmir on New Year’s Day killed at least 12 people and injured 15 others, officials said.

An Israeli government commission investigating a deadly stampede at a Jewish pilgrimage site in April held its first day of hearings on Sunday, almost four months after 45 people were killed.

Israeli officials under scrutiny over warnings ahead of festival stampede deaths

Officials are coming under growing scrutiny for ignoring warnings about safety lapses at one of Israel’s most visited holy sites, as the country mourned 45 ultra-Orthodox Jews killed in a stampede at a festival.

Dozens killed in stampede at ultra-Orthodox religious festival in Israel

Video footage showed large numbers of people, most of them black-clad ultra-Orthodox men, squeezed in the tunnel.

It was the first huge religious gathering to be held legally since Israel lifted nearly all restrictions related to the coronavirus pandemic.

At least 11 women were trampled to death when a stampede broke out among thousands of Afghans waiting in a football stadium to get visas to leave the country, officials said.

Thirteen people have died in a stampede at a disco in Peru after a police raid to enforce the country’s lockdown during the coronavirus pandemic, officials said.

DCC shares shot up 4.5% yesterday on the back of the support services group announcing improved first-quarter profits and further acquisitions in the US and the UK.

At least 22 people were killed and 27 others injured in a stampede on a crowded pedestrian bridge connecting two railway stations in Mumbai during Friday morning's rush-hour.

It has been reported that hundreds of Italian football fans have been injured in one of Turin's main squares.

Eight killed in stampede during food handouts in Zambia

The dead include six women, one man and one boy.

At least 19 people have been killed and 25 others injured in a stampede as they were crossing a crowded bridge to reach the venue of a Hindu religious ceremony in northern India, police said.

One dead, 20 hurt after terrorist drill in Kenyan university

A drill to test terrorism preparedness at a leading Kenyan university led to a stampede in which one person died and 20 others were injured, the institution said.

Pilgrims resume hajj after at least 719 killed in stampede

Muslim pilgrims are continuing with the final rites of hajj a day after more than 700 people died in a stampede.

A stampede killed at least 717 pilgrims and injured hundreds more on the outskirts of the holy city of Mecca in Saudi Arabia, the deadliest tragedy to strike the annual hajj pilgrimage in more than two decades.

At least 150 people have been killed in a stampede at the annual hajj pilgrimage, Saudi Arabia’s civil defence directorate said.

At least 22 people have been killed in a stampede during a charity handout during the Muslim holy month of Ramadan, police in Bangladesh said.

VIDEO: What happens when you don't get out of the way of the Queen's Guards