The State destroyed a woman’s family; her son pieced it back together again
#Limerick On The Rise#HousingPlace: Limerick
 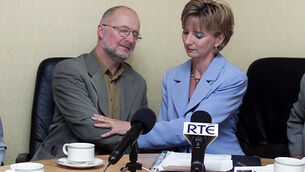