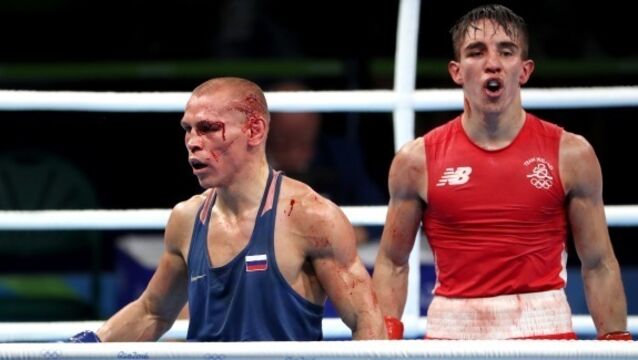 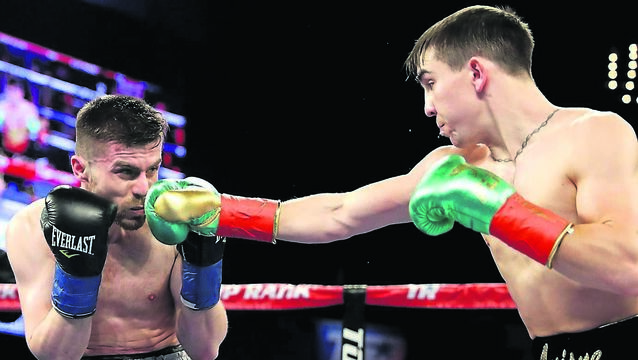 Michael Conlan switched to southpaw to hammer out a Madison Square Garden hat-trick in a two-round demolition of David Berna at the iconic New York boxing venue on St Patrick&rsquo;s Day. 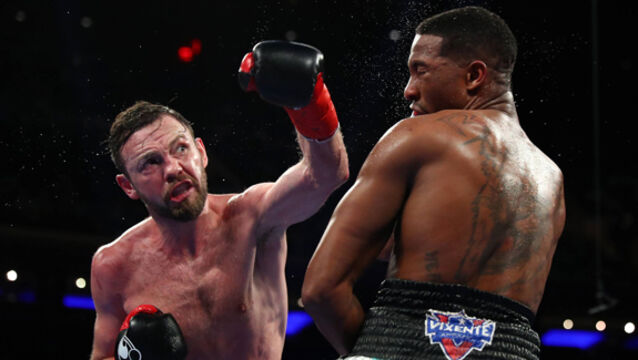 Andy Lee has announced his retirement from boxing after a much-admired career in both the amateur and pro ranks.

Boxing: Belfast boy Burnett has the skills and fire to halt Haskins

Andy Lee returned to the ring with a whisper more so than a bang following a 15-month absence.

What next for fallen champion Andy Lee?

Andy Lee&rsquo;s display following his world-title loss to Billy Joe Saunders saw the deposed Limerick champion maintain the same battling heart he had shown in the ring a short while earlier.

Andy Lee is desperate to mark this December, a month of poignant personal anniversaries, in style when he finally makes the first defence of his WBO title in Manchester tomorrow night.

Andy Lee&rsquo;s preparation for his world title defence against Billy Joe Saunders has been helped by the frustrating double postponement, according to his coach Adam Booth, who has revealed how the improvement shown by the WBO champion in the gym alone has left him with &lsquo;goosebumps&rsquo;.

Andy Lee admits the cancellation of his dream homecoming world title defence has boosted Billy Joe Saunders&rsquo; chance of victory, after the fight was rearranged to take place in Manchester.

Promoter Frank Warren claims he is open to the possibility of a rematch between Andy Lee and Billy Joe Saunders taking place in Limerick next year after their world-title bout, originally fixed for Thomond Park next month, was last night postponed for an October date in Manchester.

Katie Taylor bitterly disappointed to miss out on Thomond date

Katie Taylor has been left bitterly disappointed, according to her father and trainer Peter, after it was confirmed the Olympic champion will not feature on the undercard of Andy Lee&rsquo;s world-title defence at Thomond Park next month.

Andy Lee Interview: ‘I didn’t know what I was doing. I was concussed’

It wasn&rsquo;t until that last fight in Brooklyn that Andy Lee realised just how true some words of that neighbourhood&rsquo;s most famous and notorious son really were.

Gary &lsquo;Spike&rsquo; O&rsquo;Sullivan is hoping to fly the Cork flag high above Thomond Park on September 19 and secure a world title shot against the winner of the main event in the process.

Katie Taylor could appear on the undercard of The Showdown between Andy Lee and Billy Joe Saunders at Thomond Park with discussions about her involvement still ongoing.

Andy Lee&rsquo;s manager and coach Adam Booth believes that it will be a triumphant homecoming for the Limerick southpaw at Thomond Park.

Winning a world championship was a dream for Andy Lee, all the more so after&nbsp;two major career-threatening defeats and then the passing of his legendary&nbsp;mentor Emanuel &lsquo;Manny&rsquo; Steward.&nbsp;

Andy Lee decided to postpone a proposed homecoming world title defence in Ireland because victory in New York over Peter Quillin will transform him into a &ldquo;global star&rdquo;.

Champion Lee is home in Castleconnell at last

Forget being tired in the ring, Ireland&rsquo;s newest world champion, Limerick boxer Andy Lee, must be exhausted with his seemingly endless homecoming.

A date for the first defence of Andy Lee&rsquo;s new WBO middleweight title could be arranged before Christmas and promoter Frank Warren has revealed that a homecoming show in Ireland is &quot;a viable situation&quot;.

It is said the mark of a true champion is an amalgam of excellence, respect, and humility.

You would have to go a long way before you find anybody with a bad word to say about Andy Lee.

Dressed in a black tracksuit with matching baseball cap, Andy Lee looks out from the vast balcony in his penthouse suite at the Las Vegas Cosmopolitan.

There will be a strange sense of familiarity for Andy Lee in Las Vegas on December 13 when he faces Matt Korobov, whose parents might even count the Limerick southpaw among their family friends.

Andy Lee could be set for a shock challenge for the World Boxing Organisation (WBO) middleweight title in Dublin this December.

A Rebel ready to rumble as Perez back in the garden

Who knows what&rsquo;s going through Mike Perez&rsquo;s head this week?

Andy Lee has described his world title eliminator in Madison Square Gardens tonight as the &quot;make or break&quot; moment of his career.

Andy Lee blamed ring-rust for his underwhelming performance against Frank Horta but is now hoping to seal a world title shot at light-middleweight before the end of the year.

Lee drops down and eyes Mayweather

Andy Lee believes his step down in weight opens up a “whole new world of boxing” — one which includes the world’s leading fighter, Floyd Mayweather Jnr.

The look on Andy Lee’s face when the referee called a halt to his bout with Ferenc Hafner, after just 1 minute and 19 seconds of round two, said it all about the man’s current level of ambition.

Carl Froch clambered up from a shocking first-round knockdown to retain his WBA and IBF super-middleweight titles with a controversial ninth-round stoppage of George Groves in Manchester last night.

Andy Lee might have only found out about tonight’s fight on Tuesday, but the Limerick middleweight believes it could be a career-altering evening in his quest to become world champion.

Down time after enjoying Broadway hit

Now I can relax and enjoy my wedding in a month.

The professional boxing season has thrown up several dramatic fights and one master class from ‘Pretty Boy’ Floyd Mayweather in recent weeks.

ANDY LEE: Me and Macklin? He may just have to wait

Last Saturday night I out-boxed a very determined man in Anthony Fitzgerald. Considering it was my first fight in nine months and my first under a new coach, I’m happy to take the points win.

ANDY LEE: The road to redemption goes through Belfast

Tomorrow night in Belfast I will step back into the ring and start a new phase of my career. I’m facing Anthony Fitzgerald from Dublin.

Lee to tackle Fitzgerald in Belfast

Losing takes the one thing a boxer needs: confidence

The art of boxing is a study of a lifetime, one which you can practise everyday but never fully master.

David Haye has rubbished claims from Vitali Klitschko’s manager he is “afraid” of facing the Ukrainian heavyweight.

David Haye has rubbished claims from Vitali Klitschko’s manager that he is “afraid” of facing the Ukrainian heavyweight.

German detectives must sit and wait for up to a fortnight as their pursuit of David Haye is held up by red tape following Saturday’s brawl in Munich.