Shamrock Rovers 3 Cork City 1: Cork City still have plenty of time to wrap up this Premier Division title &mdash; six games, to be exact &mdash; but what looked for so long like a procession has come to resemble more of a tired stumble for the finishing line.">
X
    
Brendan O'Brien 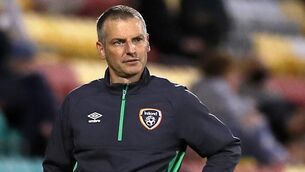 Jim Crawford: 'Grassroots is where the fire is lit in players, the place they fall in love with the game'