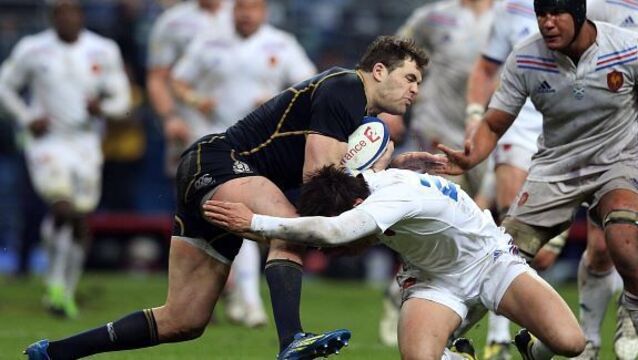 RBS Six Nations: France v Scotland: The start of a new Six Nations campaign is usually destined to throw Frenchmen of every age, shape and political persuasion into a tizzy. As former captain Fabien Pelous once said: &quot;It is like the start of a new romance. You see a girl across the room, your eyes meet and you both know that everything is possible.&quot;

End of an era?

They sit atop the French championship and have qualified for yet another Heineken Cup quarter-final but there’s something not quite right at Toulouse this season, writes Ian Moriarty

ENTHUSED by being honoured with the captaincy of an Irish team for the second time in his illustrious career, Ronan O’Gara is avidly looking forward to tomorrow might’s clash with the Barbarians at Thomond Park, not least because his great friend Alan Quinlan will be in the opposing line-up!

‘The Munster thing? There will never be anything like it’

ALAN’S KEY: WALK ON THE LINE, NOT OVER IT

‘No regrets’ as Pelous bows out

FORMER France captain Fabien Pelous says he has no regrets about calling time on his illustrious career yesterday, even though his body is still telling him to play on for another few years. The Toulouse lock, who made a record 118 appearances for his country, announced he would be hanging his boots up at the end of the season.

BUTCH JAMES insists Bath will learn from their last-gasp Heineken Cup defeat away to Toulouse yesterday.

FAR from a classic, but the game was laced with some magnificent rugby and, in the end, few Toulouse supporters could argue that their side deserved to depart from the Millennium Stadium with a fourth Heineken Cup.

Munster line out in Cardiff

Munster returned to the Millennium Stadium targeting a repeat of their greatest European day and a second Heineken Cup title in three seasons.

Castaignède: Munster are past their best

The power of Munster against the speed of the French Ferrari is how former France international and Toulouse legend Thomas Castaignède has billed Saturday’s Heineken Cup Final.

FABIEN PELOUS could become the first player to captain a team to a hat-trick of Heineken Cup final triumphs — but so far his most cherished memory of Europe’s premier club rugby tournament is when Toulouse had the trophy snatched from their grasp by London Wasps in the 2004 Twickenham thriller.

Toulouse dig deep to power through to final

CARDIFF BLUES coach Dai Young believes Toulouse can go all the way to a fourth Heineken Cup title after his side were taken apart 41-17 at Le Stadium.

TOULOUSE captain Fabien Pelous has bad news for Leinster — his side won’t roll over to Edinburgh in this weekend’s Heineken Cup clash. That, of course, means Leinster can do their best against Leicester Tigers at Welford Road and it still won’t make any difference to their hopes of qualification for the quarter-finals.

LEICESTER captain Martin Corry admits his side’s Heineken Cup hopes are “out of their hands” after sinking to a 22-11 defeat in Toulouse.

Pelous vows to pile on the pressure

Fabien Pelous hopes Leicester will feel the heat when they take on Toulouse in a crucial Heineken Cup clash tomorrow.

France’s Fabien Pelous, the second most capped player in rugby history, has retired from internationals.

ROB ANDREW admitted England had “rewritten the rules” after reaching the World Cup final despite three years of upheaval and just 10 months of dedicated planning.

Heartbreak for France in Paris

FRANCE may grumble at the inconvenience of playing their World Cup quarter-final in Cardiff, but for Fabien Pelous it is a blessing to face New Zealand overseas.

Bring on the All Blacks, says Laporte

FRANCE have a full-strength squad to select from for their last World Cup Pool D game, against Georgia, on Sunday in Marseille.

Why caveman’s the king of cool

YOU were forewarned by Bernard Laporte himself. Last week, quizzed on his selection of Sebastian Chabal at lock, the French coach simply said Chabal could offer his team certain things that Jerome Thion and Fabien Pelous couldn’t. Certainly neither Thion nor Pelous could have scored Chabal’s rampaging second try last Sunday night against Namibia, but then there’s hardly a second-row in the world who could.

Pelous ruled out as injury cloud hangs over France

THE smile may have returned to French rugby following their mauling of Namibia, but injury concerns are threatening to derail Les Bleus’ plans ahead of their pivotal World Cup clash against Ireland on Friday.

Fabien Pelous and Imanol Harinordoquy have emerged as injury concerns for France ahead of Friday’s pivotal Pool D clash with Ireland in Paris.

Fiery French get back on track

WORLD Cup hosts France took out nine days of pent-up frustration on Namibia with a resounding victory that will have drawn nervous glances from Ireland last night.

FRENCH rugby coach Bernard Laporte has dropped 12 players from the side which lost to Argentina in the World Cup opener for his side’s next game against Namibia.

WELL, at least the beer on offer in the Stade de France is no longer under scrutiny.

France happy to sacrifice flair in ensuring victory over Pumas

LOCK Fabien Pelous has vowed France will sacrifice flair in order to win by any means possible in Friday’s World Cup opener against Argentina.

GARETH JENKINS admitted Wales were taught a lesson in finishing by France as they signed off ahead of the World Cup with a 34-7 defeat at the Millennium Stadium.

France will give more of their squad players a chance to impress ahead of the World Cup when they take on Wales in Cardiff on Sunday.

LAWRENCE DALLAGLIO emerged from the ruins left by England’s latest calamitous away day collapse — a 22-9 loss to France — and conceded: “This has given us a bit of a reality check.”

Sweat for Tindall as Ashton moves early on Cup squad

THE agonising waiting game for England’s World Cup hopefuls could be over sooner than expected.

Fabien Pelous will make his return to international rugby tomorrow after being named in France’s team for the World Cup warm-up match against England at Twickenham.

France team manager Jo Maso does not believe England’s crushing victory over Wales will have an influence on his team’s clash with the world champions at Twickenham on Saturday.

FRANCE are determined to learn from their mistakes of four years ago as they head into their series of warm-up matches ahead of the World Cup.

INJURED France captain, Fabien Pelous, is in the dark about whether he will play in this year’s RBS Six Nations Championship.

THE injuries are mounting up for France ahead of their RBS 6 Nations Championship opener against Italy on February 3.

France captain Fabien Pelous has returned to training after a spell on the sidelines with an ankle problem.

Fabien Pelous has been ruled out of action for up to six weeks with an ankle injury – but the France captain should be fit for the start of the RBS 6 Nations Championship.