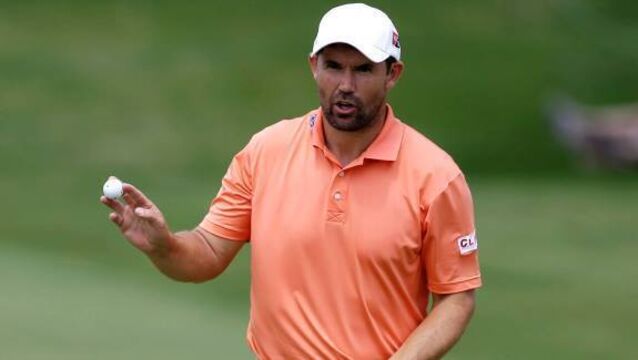 P&aacute;draig Harrington has endorsed the R&amp;A&rsquo;s decision to embrace nine-hole golf as a &ldquo;legitimate alternative&rdquo; to the 18-hole format in today&rsquo;s time-pressured world. 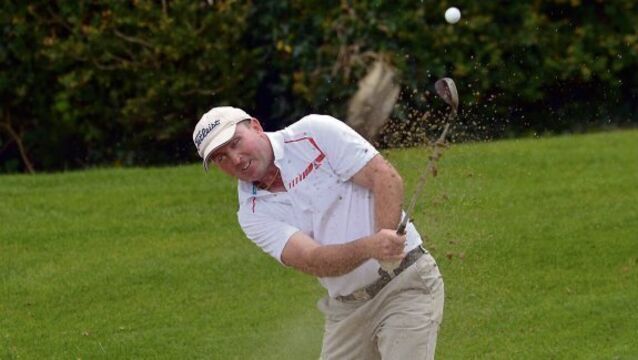 It was a bad day for Munster golf as Muskerry and Douglas crashed out in their respective semi-finals of the AIG Cups and Shields National Finals at Carton House. 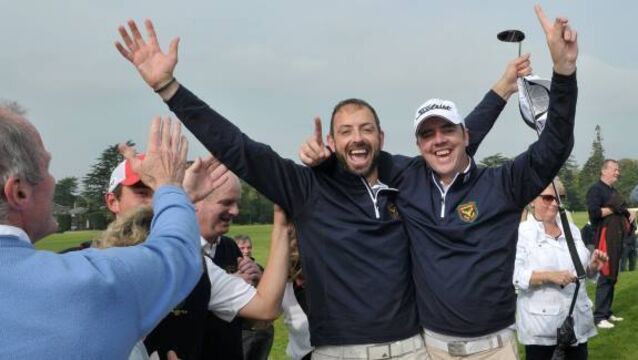 Muskerry’s Niall Gorey geared up for battle with ‘superstars’

It&rsquo;s like the Champions League of golf but unlike the continent&rsquo;s premier football tournament which has yet to be retained by any club, Muskerry&rsquo;s Niall Gorey is hopeful the Cork club can become the first back-to-back winners of the AIG Barton Shield for 18 years.

Inside Golf: Drama guaranteed with ‘real’ golf at AIG Cups

Experienced Limerick and Muskerry march on

With the majority of young amateurs nowadays turning professional as soon as they make any kind of mark in the championship arena, the days of course specialists have more or less dwindled away to nothing.&nbsp;

Paul McBride, a student at the famous golfing academy of Wake Forest in North Carolina which numbers Arnold Palmer, Eoghan O&rsquo;Connell and Darren Clarke among its alumni, demonstrated once again at Lahinch yesterday that Malahide continues to produce young golfers of the highest calibre.

Des Morgan impresses at South of Ireland Championship in Lahinch

Ever since the distinguished golf course architect Martin Hawtree modified and considerably altered the famous old links in 2001, Lahinch has become a formidable challenge for the game&rsquo;s finest, whether amateur or professional.

Defending champion Jack Hume is the bookies&rsquo; favourite and Rosses Point&rsquo;s Gary McDermott the home hope but young Dubliner Kevin LeBlanc could surprise some in the Radisson Blu-sponsored West of Ireland Amateur Open at County Sligo.

Niall Gorey works for the company that makes the All-Ireland winners&rsquo; medals but yesterday he earned one to keep as Muskerry delivered one half of an AIG Cups and Shields double for Munster.

If Muskerry do not take the AIG Barton Shield back to Cork from the national finals at Carton House this week it will not be for lack of experience.

Weekend wins for Rosslare in Irish Senior Cup Leinster section and Warrenpoint in the Barton Shield in Ulster have confirmed the field for the national finals of the AIG Cups and Shields at Carton House, Kildare next month.

Muskerry, Limerick and Doneraile are chasing elusive doubles at this weekend&rsquo;s Munster finals of the AIG Irish Senior and Junior Cups, along with the Barton Shield, at Shannon Golf Club.

Munster captured the Senior Interprovincial Championship for the second time in three years when they pulled off a magnificent 7-4 victory over hot favourites and holders Ulster in an epic decider at The Island links in North Dublin yesterday.

Munster on title trail after surprise win over Leinster

Munster pulled off a considerable surprise when they hammered host province Leinster 7½ to 3½ on the opening day of the Senior Interprovincial Championship at The Island yesterday.

Hurley turns up heat to storm into semis

West Waterford’s Gary Hurley needed just 25 holes to blast his way into this morning’s semi-finals of the Radisson Blu-sponsored West of Ireland Amateur Open at a sun-kissed County Sligo.

Stuart Grehan and Pat Murray are amongst the big names competing in the South of Ireland, which begins in Lahinch this morning.

Ulster withstood a late rally by Munster at Lee Valley yesterday to dethrone the home team as Irish Interprovincial champions and regain the title they last held in 2010.

Ulster and Leinster played out a thrilling tie on the opening day of the Interprovincial Championship at Lee Valley yesterday while defending champions Munster survived a few anxious moments in mid-afternoon to emerge 7 ½-3 ½ winners over Connacht.

Underdogs Munster quietly confident they can pull off another surprise

Even though they are the defending champions and will be performing on home territory, Munster are regarded as underdogs in the Senior Men’s Interprovincial Championship beginning at Lee Valley this morning.

McNamara turns on the magic to shatter Gorey’s dreams

Muskerry’s Niall Gorey got out of jail with a dramatic semi-final comeback against Reeve Whitson, but had no answer to a brilliant Rory McNamara in the final of the Radisson Blu-sponsored West of Ireland Amateur Open at Rosses Point.

He might have been watched by 60 years-old Des Smyth, but Niall Gorey is determined to become the oldest swinger in town by breaking his championship duck in the West of Ireland Amateur Open at Rosses Point today.

He might be the last County Sligo man standing, but local hopeGary McDermott welcomes the pressure as he bids to become the first home winner of the West of Ireland Amateur Open Championship for 63 years.

Rathmore’s Alan Dunbar leads a strong Irish contingent looking to score a home victory against a stacked international field at Carton House this week for the International European Amateur Championship.

Simon Ward (Co Louth) and Muskerry’s Niall Gorey, a member of the Munster team that won last week’s Interprovincial Championship at Royal Co Down, yesterday came through two testing encounters in the South of Ireland at Lahinch to set up a mouth-watering 5th round clash this morning.

Fifty not out — take a bow Noel

Six members of the triumphant Munster team in this week’s Interprovincial Championship at Royal Co Down are included in the field for the South of Ireland Championship starting at Lahinch this morning. And yet, they will all have to take a back seat behind the remarkable Ennis man, Noel Pyne, who is competing for the 50th successive year.

Captain Phil Cooney and his superbly balanced Munster team were celebrating at Royal Co Down last night after they completed a clean sweep in the Interprovincial Championship by beating a hotly fancied Ulster side by 7 matches to 4.

Moyola Park’s Chris Selfridge took the title but not before West Waterford’s Gary Hurley hit one of the most dramatic birdies ever seen at Royal Portrush to set up a nerve-jangling finale to the Golfsure sponsored Irish Amateur Close at a sun-kissed Dunluce Links.

Muskerry’s Niall Gorey and West Waterford’s Gary Hurley are just five shots off the pace after a scorching start to the Golfsure-sponsored Irish Amateur Close.

England’s James McCormick was the surprise leader after the opening stroke play round of the Radisson Blu-sponsored West of Ireland Amateur Open Championship at a damp and gloomy Rosses Point yesterday.

Dunbar aiming to atone for 2011 loss in West of Ireland

The traditional first big event on the domestic annual calendar, the Radisson sponsored West of Ireland Championship, gets underway today with the first of two stroke-play qualifying rounds leading up to the final on Tuesday next.

Hoey king for the day in Morocco

Michael Hoey put his rivals to the sword, including fellow Irishman Damien McGrane, in being presented with a ceremonial dagger as his prize for winning the Hassan II Trophy in Morocco.

Murphy playing game of his life

Big Break winning hero, Mark Murphy is living the dream after putting himself into contention in the weather affected Hassan II Trophy in Morocco.

There was not even the proverbial man and his dog on hand to witness Damien McGrane move to a two-stroke lead with a 65 on the opening day of the Hassan II Trophy in Agadir.

Shane Lowry has never played Augusta National but believes it would be easier to play a round of golf on next month’s Masters venue than to tee up on this week’s host Hassan II Trophy course at Agadir.

For the second day of the Volvo Golf Champions at Fancourt in South Africa, Pádraig Harrington finished with a double-bogey seven and, having also dropped shots on the previous two holes, the Dubliner’s 73 left him, and Open Champion Darren Clarke (68), with eight shots to make up to leader Branden Grace.

WOODSTOCK Golf Club from Ennis were celebrating last night after pulling off a superb victory in the final of the Chartis Pierce Purcell Shield.

A DISASTROUS result in the morning foursomes against Scotland cost Ireland dearly on the final day of the Home International Championship at Rosses Point yesterday.

IRELAND’S victory over Wales at County Sligo’s Rosses Point yesterday lacked the nail-biting tension of the previous day’s narrow defeat of England but it still put them very much in prime position to win the Home Nations Championship when they come up against Scotland in today’s final round of matches.

Ireland close in on trophy as Gorey holds nerve on 18th

NIALL GOREY of Muskerry was the Irish hero as the host nation pipped reigning champions England in a dramatic climax on the first day of the Men’s Home Internationals at a wet and windy Rosses Point yesterday.