Maxwell and Epstein ‘pictured at log cabin on Balmoral estate’ 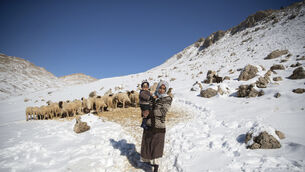