Alisson Becker: Liverpool out of Champions League race unless they fix form 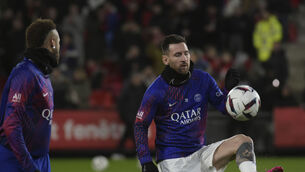 PSG in talks with Messi over renewing contract