Man United 2 - Chelsea 1: Antonio Conte may have seen his long-running feud with Jose Mourinho come to an end at Old Trafford but it may also have been the afternoon when the Chelsea manager saw his team&rsquo;s hopes of a Champions League place similarly disappear into thin air.">
X
Ian Whittell
    

Crowd should not have seen Ireland's VAR incident, Uefa confirm 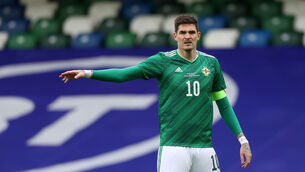