Dundalk 2 Cork City 4:&nbsp;Liam Miller would have been proud of his old club Cork City, as they fought back from two goals down to retain the President&rsquo;s Cup against their long-time rivals Dundalk at Oriel Park yesterday.">
X
James Rogers
    

Emotional Mourinho content with a victory of 'many ingredients' 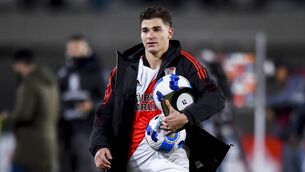