Manchester City 0 Real Madrid 0:&nbsp;Just when everyone was expecting a goalscoring free-for-all, Manchester City demonstrated &mdash; in their first ever Champions League semi-final &mdash; that they have the tactical nous to be serious contenders as they earned a goalless draw against Real Madrid at the Etihad.">
X
Chris Hatherall
     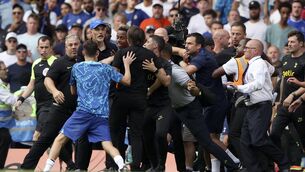 Antonio Conte pleased with Tottenham’s fight in comeback at Chelsea