Rory McIlroy: 'Mentally it was very tough. I could have let my emotions get in the way.'
 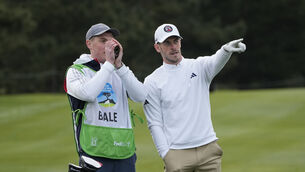