No Quinlivan or O'Riordan in Tipp setup, confirms Power

UL knock defending champions university of Galway out after extra-time 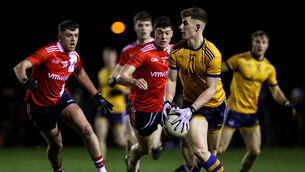