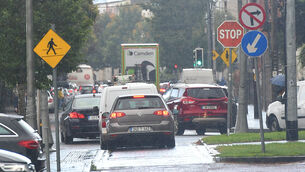 Michael Moynihan: A sense of driver entitlement — where the streets have no laws