Ireland 'not able to defend itself from air, sea, or cyberattack'

Everything you need to know about the JP McManus Pro-Am 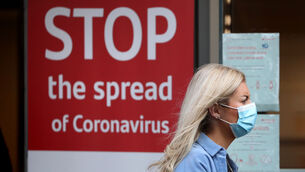