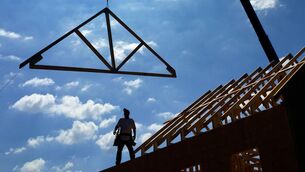 Housing targets in 'significant trouble' with 16% contraction in home building