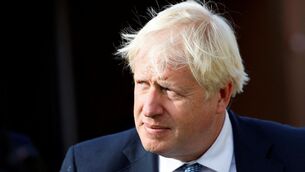 Johnson: Anyone who thinks I lied about lockdown parties is ‘out of their mind’