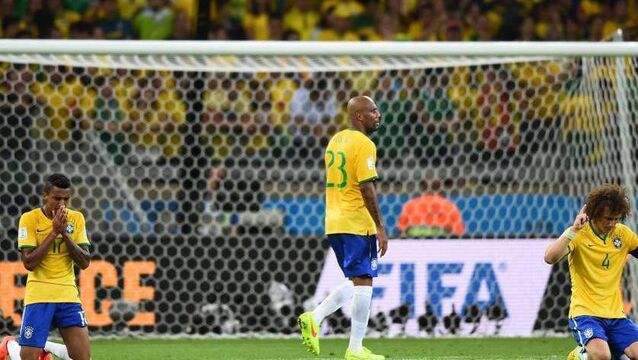 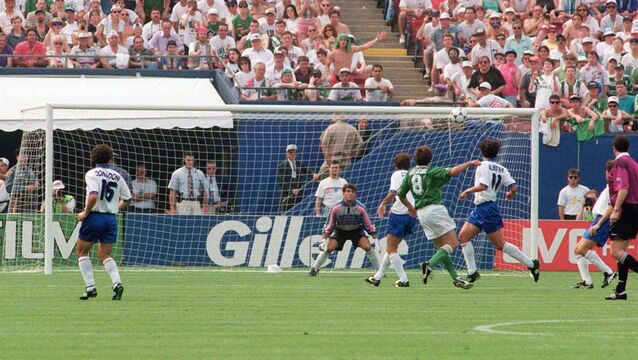 Ray Houghton: I remember thinking to myself 'just hit it, why not?'

"When you score at a World Cup you're forever remembered.” So said Ray Houghton today as he reflected on the impact of his goal which gave Ireland a famous victory over Italy in Giants Stadium at the US ’94 World Cup. 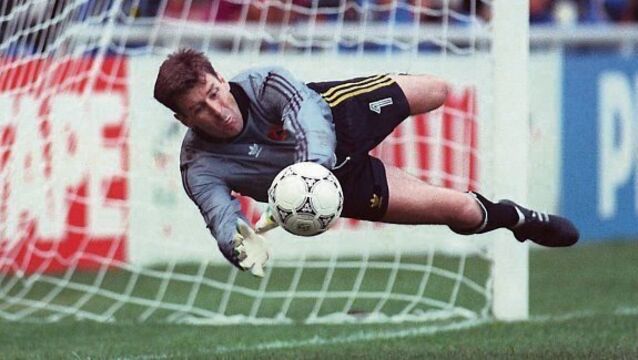 A new World Cup Gold series on TG4 will allow fans to relive Ireland’s greatest days at Italia ’90 and USA ’94.

Falling from the shoulders of giants

The 2018 World Cup is barely up and running but already we know that the 2026 edition will be jointly hosted by the United States, Canada and Mexico, writes&nbsp;Liam Mackey

Buckling under the weight of Ireland’s greatest noughties moments

So, sports fans are outraged that Jermaine Defoe is missing from the BBC&rsquo;s Sports Personality of the Year award shortlist? (According to click king Mr Google Analytics). Wait til they see this evening what the chainsaw gang in Montrose have done to the array of Ireland&rsquo;s Greatest Sporting Moments in the 2000s, writes&nbsp;Tony Leen.

Comedians tend to worry a lot about the &lsquo;too soon&rsquo; moment, that minefield of a border between the darkly funny and the wincingly crass.

American sports executive Charlie Stillitano believes only a "crazy action" by Donald Trump could prevent the United States from winning the right to stage the 2026 World Cup.

Beginning in Goleen, West Cork, in 1945, and continuing in seven-year intervals up to 2015, taking in Dublin City, Amsterdam, New York City, and Maribor, perhaps the biggest disappointment about John Boyne&rsquo;s new novel is how predictable and plodding it is.&nbsp;

Cormac &Oacute; hEadhra is from An Cheathr&uacute; Rua in the Conamara Gaeltacht. He broadcasts on current affairs programmes on RTE Radio 1, including Late Debate and Drivetime, and on RTE Raidi&oacute; na Gaeltachta.

The great day has dawned but the panel are worried. They&rsquo;re worried for any number of reasons. Let us count the ways.

Here are the major questions to be answered by 10pm tonight...

Italy&rsquo;s pre-match sentiments tend to be dominated by battle cries, but on this occasion, Antonio Conte seemed satisfied to reserve the emotive language for his opponents Ireland.

What do Ireland need to improve most?

GAA in battle for hearts and minds with rival sports

It will probably hit us when Martin O&rsquo;Neill announces his panel for Euro 2016 on Tuesday night next. Only then will it actually kick home to those of us in the GAA world that we are once again locked into a battle for the hearts and minds of sports fans in what is going to be a fairly busy summer on pitch and on screen.

That&rsquo;s life, that&rsquo;s what all the people say, you&rsquo;re ridin&rsquo; high in April, shot down in May&hellip;

The End of the World (Cup)

It&rsquo;s no small irony that the 2014 World Cup finals in Brazil, although almost universally hailed as one of the best tournaments ever, is destined to retain a unique place in football history, not for all its great games and great goals, but because of one match when, to put it at its mildest, the sublime gave way to the ridiculous.

Gerrard was my toughest opponent

From Best to Messi and McGrath to Gerrard — oh, and not forgetting Bernie Slaven! These are the stand-out players of my time.

Gotham goes wild for the Boys in Green

Maybe this New York soccer friendly will be no more than a money-spinning afterthought tacked onto a busy end-of-season schedule.

What a difference a year makes

For the Irish football fan, this time last year was full of dreams, songs to sing and camper vans to source.

One of the many thankless tasks at live sporting events is held by the lonely soul singing the anthem.

The stuff that dreams are made of

Oh, and not forgetting nightmares too. It’s all up for grabs for ireland at Euro 2012, says football correspondent Liam Mackey

The long and winding road

Falling in love with the game. Falling out of love with the game. And now, after years of thinking his chance had passed him by, the opportunity to represent his country at the European Championship finals. West Brom and Ireland midfielder Keith Andrews tells his story

Paul McGrath admits he is very concerned about Richard Dunne being fit enough to play for Ireland at the European Championship finals, and says that he is “desperate for him to be okay”.

Heroes of the Republic of Ireland’s opening games at Euro ’88 and Italia ’90 respectively, Packie Bonner and Kevin Sheedy know how crucial it is to hit the ground running at a major finals.

Robbie Keane has stressed the importance of maintaining Ireland’s unbeaten run ahead of the European Championships after a week when two of the Republic’s group opponents suffered defeats.

O’Leary not green with envy

MICHAEL O’LEARY donned the green shirt yesterday but Keano, Duffer and Big Dunney can rest easy — Micko is not making a late bid for inclusion on the Trapair flight to Poland next summer.

Flynn ends his labour of love

AFTER his 50th season as a groundskeeper for the New York Mets, Leitrim man Pete Flynn hung up his rake yesterday, throwing out the ceremonial first pitch before his club’s last game of the baseball season.

THIS was the kind of night that could just give the meaningless end of season friendly a good name, as an Irish side which spent most of the 90 minutes defending as if for its very life, somehow ended up recording a memorable, if almost inexplicable, 2-0 win against Italy.

When Charlton went from a Jack to a king

I’M sure Giovanni Trapattoni doesn’t need any additional pressure going into tonight’s European Championship qualifier against Macedonia, but if he does chance to feel the hand of history on his shoulder this morning, it might just be because, on this day 25 years ago, the most celebrated period in Irish football history officially kicked off.

Scorsese and De Niro to reunite for The Irishman

IT has been the subject of almost as many rumours as one of its key character’s demise, but film legends Martin Scorsese and Robert De Niro may finally be set to start shooting gangster movie, The Irishman.

“‘CHAPTER ONE. He adored New York City. He idolised it all out of proportion... no, make that: he &ndash; he romanticised it all out of proportion. Yes. To him, no matter what the season was, this was still a town that existed in black and white and pulsated to the great tunes of George Gershwin.’ No, no, corny, too corny for a man of my taste. Can we... can we try and make it more profound?” &ndash; Woody Allen, Manhattan.

We are all confident we can win it, says Duff

ANYONE still in denial as to the scale of the mountain Ireland must climb in Paris tomorrow night need only ask Damien Duff.

Bringing it all back home

IN football, as in life, as in the songs of Creedence Clearwater Revival, the big wheel keeps on turning. On a cold, rainy morning in November 2004, I sat with Brian Kerr in the Red Cow Hotel on the outskirts of Dublin and the talk was of a World Cup qualifying campaign involving, amongst others, Ireland, France and the Faroe Islands. Now it’s five years almost to the day, and I’m back in the same venue sitting across from the same man and, once again, the talk is of World Cup qualifying and of Ireland, France and the Faroe Islands.

Given wants a street party

Shay Given is desperate to give the nation a chance to dance in the streets as he once did by securing another trip to the World Cup finals.

Getting in New York state of mind

NEW YORKERS take sportvery seriously and have some ofthe best known teams in the world operating out of legendary venues.

Liam Brady is convinced the Republic of Ireland have got world champions Italy worried simply because of their choice of venue for Wednesday night’s qualifier.