Reward offered for parents of suspect in Michigan school shooting 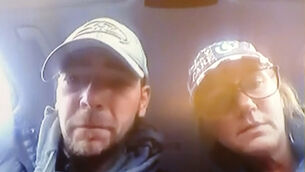 Parents of teenager accused over school shooting caught in Detroit