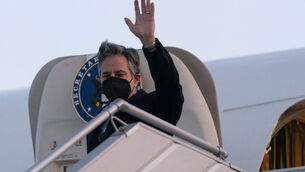 Top US diplomat in Ukraine as tensions with Russia soar