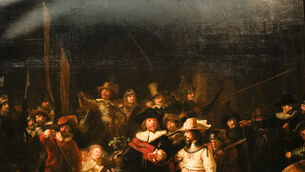 Dutch museum to fix ripples in Rembrandt’s The Night Watch