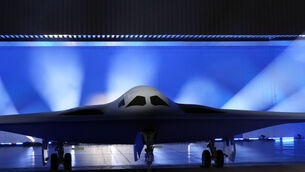 US unveils its new stealth bomber as tensions with China rise