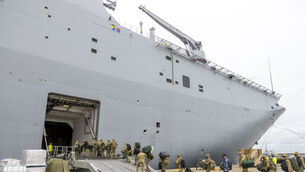 Officials: 23 Australians on ship delivering aid to Tonga have Covid-19