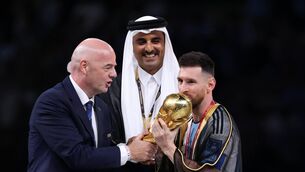 Emir of Qatar interested in buying Manchester United for £4.5bn