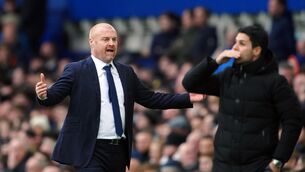 Arteta on Arsenal: 'These are the moments when I love my players and staff more and we're going to stay together'