Celtic 5 Rangers 0: Celtic manager Brendan Rodgers admits his side should have equalled their record Old Firm win after they clinched their seventh successive Premiership title in stunning style with a 5-0 thrashing of Rangers at Parkhead.">
X
    
Ronnie Esplin

Survival joy for Marsch and Leeds 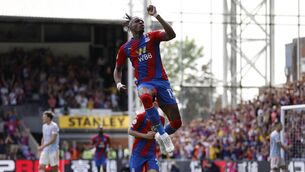