Aston Villa 2 Sunderland 2:&nbsp;A moment of frustration left Tim Sherwood with a hamstring injury &ndash; but the Aston Villa boss was delighted with his team&rsquo;s performance despite having to settle for a draw against Sunderland.">
X
    
Sean Taylor 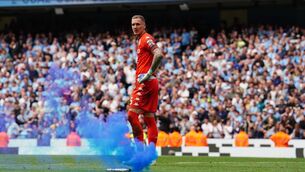 Roy Keane: 'People have come back after Covid and forgotten how to behave themselves. Idiots, scumbags'