Cork City 4 Drogheda United 1: A tremendous second half hat-trick from Billy Dennehy saw Cork City put an indifferent first-half performance behind them to move to within four points of leaders Dundalk at the top of the Airtricity League Premier Division with a 4-1 victory over Drogheda United at Turners Cross last night.">
X
David Ludzik
     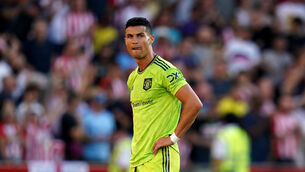 Cristiano Ronaldo hits out at ‘lies’ regarding Manchester United future