Connacht 47 Leinster 10: On a day when Connacht bade farewell to their talisman from Portumna, along comes another farmer&rsquo;s son from a few miles away on the other side of the River Shannon to lay down a marker and offer hope for the future with hooker Shane Delahunt producing a remarkable display on a day of celebration in Galway.">
X
John Fallon
    

Bundee Aki making the most of home comforts 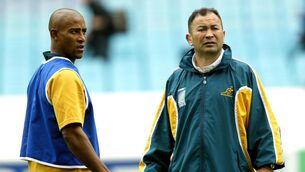 England can bounce back under Eddie Jones, says George Gregan