Devin Toner may reach for the sky but horizontal seems to be the default mode.">
X
Brendan O'Brien
     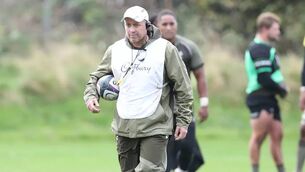