Glenstal 27 St Clement&rsquo;s 10: Glenstal are quietly fancied to make their presence felt in this season&rsquo;s Clayton Hotels Munster Schools Senior Cup and they got their campaign off to a solid start on the 4G UL pitch yesterday by beating St Clement&rsquo;s 27-10.">
X
    
Charlie Mulqueen 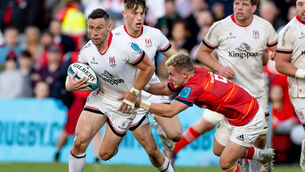