S Donal Lenihan: Awful game, but sleep soundly that Ireland are nowhere near their peak 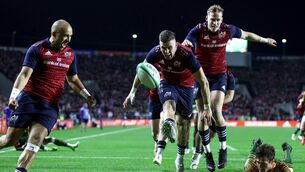