Putin’s conscripts won’t win his war but may drag it out
#Budget2022Organisation: Sinn Féin
 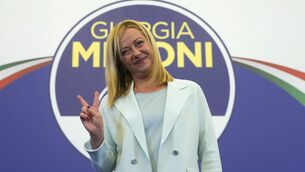