Man charged in relation to threats made to direct provision centre 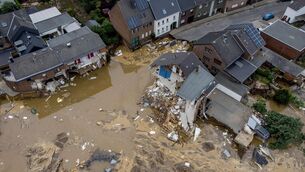 Climate is changing faster than our planning policies, and our homes can't wait