'Now you see the danger of it': Crossing to island not so sound for people on Dursey
CorkGreece
 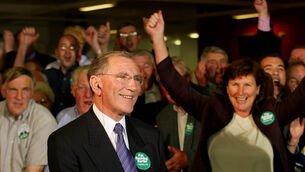