Homeless man told garda, 'Take that you f***er' as he assaulted him, fracturing two ribs 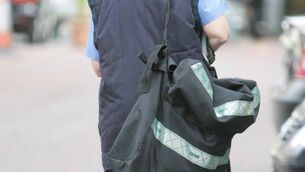