Q&A: What are my rights if airport delays cause me to miss my flight?

Irish Examiner view: Tourism industry wouldn't be what it is without Ryanair

Look inside: What it's like onboard the luxury Jewel of the Seas in Cobh

10 Irish camping and glamping experiences for an amazing summer staycation

Three family getaways to get you in the mood for school summer holidays
#Summer TravelholidayfinlandScandinaviaWeekend Breakcity breakPlace: Helsinki
 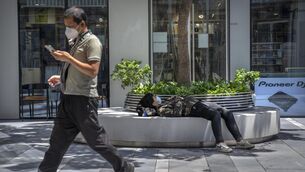