Colm O'Regan: I haven't settled on our Christmas sweets strategy yet
 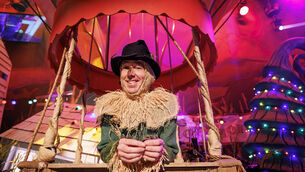