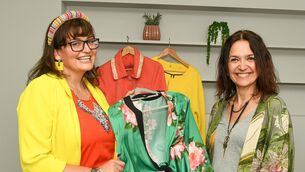 Watch: Esther N McCarthy inspires us to find our superpower and save the planet