Paul Brogan: I was supposed to take my shirt off for the Samba –production said I wasn’t allowed
 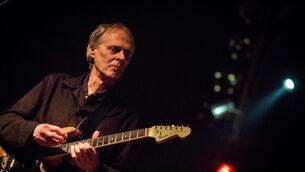