Watch: North Cork households aim to outshine each other in Battle of the Christmas Lights 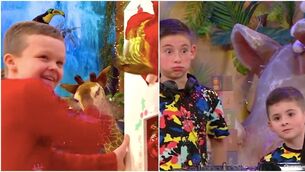