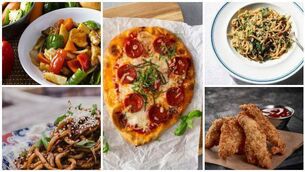 What will I cook for dinner? Five store cupboard recipes ready in 30 minutes