Skiing and snowboarding Santas take to the slopes for charity
TyphoonPlace: International
 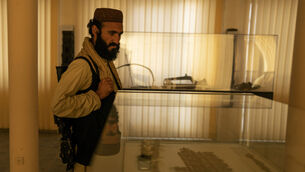