Manchester City&nbsp;5 - Monaco 3: Manchester City still can&rsquo;t defend &mdash; and after conceding three goals at home they still aren&rsquo;t certain to go through &mdash; but who really cares when Pep Guardiola&rsquo;s men can produce a performance like this which must go down as one of the greatest Champions League ties of all time?">
X
    
Chris Hatherall 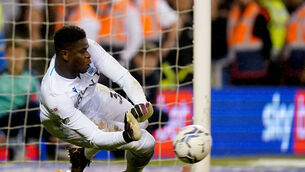