BATE Borisov 1 Dundalk 0:&nbsp;Substitute Mikhail Gordeichuk&rsquo;s 70th minute strike for BATE Borisov in the Borisov Arena last night finally broke Dundalk&rsquo;s resistance to leave the League of Ireland champions with it all to do if they are to realise their Champions League dream.">
X
James Rogers
    

Virgil Van Dijk: Darwin Nunez must control himself but ‘we will always back him’ 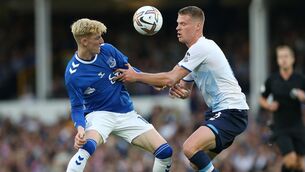