Liam Mackey and the result is a conversation encompassing the League of Ireland, Fifa, Roy Keane, Jose Mourinho and Kofi Annan, as well as Seamus Coleman meeting the Duke of Edinburgh, that Jon Walters selfie and how he&rsquo;d like to see Ireland play at Euro 2016.">
X
Liam Mackey
     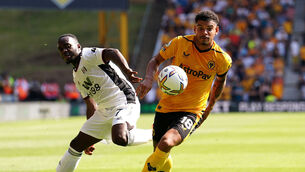