Watford 0 Crystal Palace 1:&nbsp;Alan Pardew hailed the resoluteness of Wilfried Zaha, who was publicly rebuked by the Eagles boss after being hauled off at half-time in the defeat to Tottenham last week.">
X
Mark Bryans
     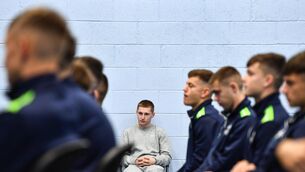 Small in stature but seismic in soul, Tierney looks to drive U21s on