Athlone come from behind to beat Galway 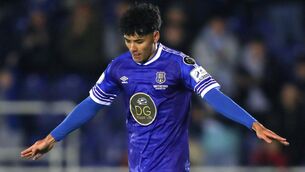 Waterford in pole position for second-placed finish after Treaty win